Some days our emotions get the best of us and we feel discouraged. Well, the other day Jim and I were feeling just that. We were tired and a little stressed getting Charlotte out the door for school and having to be in Newport Beach (35 minutes away) with Lily for an early weekly appointment. The drive with Lily was very quiet. Little did I know that Jim and I were both experiencing the same deflated feeling.

After our appointment we always stop by Starbucks before heading home. After we parked I headed into Starbucks until I was stopped by a casual, friendly-looking older gentleman, Ray, with a soft smile and white half-shaved beard. He stopped me to ask about our vehicle. For those of you who don’t know we purchased a motility vehicle for transportation with Lily. It’s very different looking (looks like a big British taxi or a secret service mobile) and there are very few on the road. We had no choice in color (black) or features because only one was available when we bought it and the dealer wasn’t getting any more for several months. Anyway, we ended up talking about Lily. A few minutes later his son, Wayne, walked up and joined in. I come to learn that Wayne was an Olympic athlete in training at age 19 when he suffered a tragic cycling accident about 10 years ago. He explained in detail about his broken shoulder and ribs, how his nose jammed and shattered his eye socket, he had 2 brain surgeries in which part of his right frontal lobe was removed, how his spasticity was so bad that his feet curled in and up to his knees, how he was revived twice and that his parents signed a DNA if he coded again because doctors told them that he had no brain activity, how he was in a coma for 7 days, and on and on. He had 3 1/2 years of intense therapy; he had to re-learn to walk, talk, read, and write and so on. He is a true miracle, his nurses, family and friends never gave up on him. And I’m astounded to say that if you ever met him on the street you would NEVER KNOW what he’s been through. He is a true miracle. And he continues to make accomplishments he was never expected reach. And as we wrapped up our conversation he added that now he is not afraid of dying (“…it’s painless”) and that he has no regrets of what happened to him–that he chose to “take-on” his pain and suffering so someone else, perhaps his parents, didn’t have to. And that he has no regrets and that he’d do it all over again. Wow. This really struck me because it has been suggested by some that Lily chose this journey, too. Sounds like someone else we know, right?

My intention for telling this story is to confirm that when you need to be lifted up most that God will reveal himself. God knew that we needed a boost of renewed hope and energy and it’s no coincidence I met this selfless and amazing young gentleman. 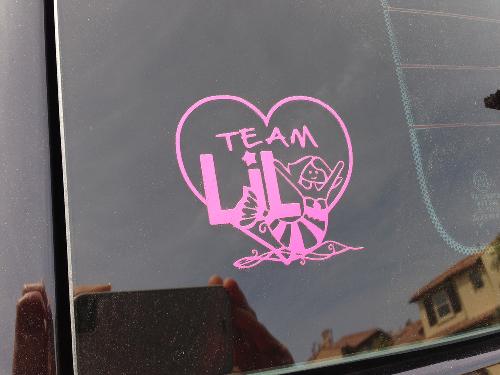 Filed Under: Recovery Tagged With: Faith