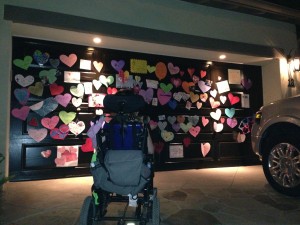 Lily taking in her Love Bombs

Monday was an emotional day. It was a day of raw emotions yet it was also a day of happy ones, too. It’s hard to believe a year has passed since Lily has talked, walked, ate a meal, and just been a typical carefree-kid.

We decided to make July 8th not only a day to reflect but also to make it a day of happiness, too. So we went to the happiest place on Earth, Disneyland. We met up with Auntie Linz and Cousin Ava late in the day when the temperature cooled down. It was a beautiful, warm summer evening. We took Lily on A Small World, The Jungle Cruise and the Railroad Train. We also saw the Fantasia light show and the fireworks. We really had a nice time and I think Lily did, too.

We rolled in the driveway about midnight to a very special surprise. We had been “Love Bombed”. Our dear friend Loretta initiated a special act of kindness by having friends leave notes of love and encouragement on cut-out hearts and then posting them all over the front of our house. It was heart-warming to see that Lily is still in your prayers and in your thoughts. Thank you everyone who left us a piece of your heart.

Lily had a typical, busy week. She had hours of therapies and doctor appointments. The sore on her baclofen pump incision scar seems to be in holding pattern. She finished nearly 20 days of heavy-duty antibiotics and although the sore doesn’t appear to be worsening it’s not going away either. We meet with her physiatrist on Monday to refill the pump. Our ideal game plan would be to decrease the dose of the baclofen to the point where it could be removed and she could be on a low enough dose of oral baclofen where it would not affect her cognitive function. To do this we need time to gradually wean off of the pump but if the sore doesn’t improve she will need surgery to revise the incision. Infection has not been ruled out entirely. We have to take it day by day (just like everything else).

Lily is moving her arms, hands and fingers (more on the right). She is starting to use an iPad with a touch screen program to communicate (in addition to her yes/no eye blinks). So far we are practicing with “yes” and “no” and will keep adding other words. Our number one goal is to get her voice back. We have brought on two more speech therapists. They are two extremely qualified therapists with lots of experience with children in similar injuries. We are very hopeful these ladies will help Lily tap into her voice.

Lily continues to have physical and occupational therapy 6-7 days a week with two more physical therapists on Team Lily. Speech is about 5 days week which includes VitalStim for eating therapy. She is also doing her alternative therapies as well.

She continues to grow and thrive as any healthy 10-year-old. When I look at her it’s hard to believe she is injured. Overall her health is very good. However we were recently reminded how her heart still remains a significant concern. In June at her 3-month cardiology check-up her ICD was interrogated and we learned that she had a run of ventricular tachycardia back in late April. Jim and I were out one evening for a school fundraiser and the girls were home with a new nurse. It’s still not clear what initiated her attack but she was in distress. The paramedics were called but by the time they arrived she came out of the 11-minute run on her own (even though her ICD shocked her six times!) This was her first event since Labor Day. Now we will be seeing her cardiologist every two months. Obviously it was very hard to hear that her CPVT is still a big concern. However, on a positive note we received the results of Jim’s genetic testing; he does NOT have the RYR2 CPVT gene. That means NEITHER one of us carries the gene so where did it come from? She must have had some kind of genetic mutation in utero. I will be researching this.

Thank you everyone for keeping Lily and her ongoing journey very much alive in your hearts. It’s been a long year on a long road and part of me tells me that we’re just getting started. We need to keep the momentum of well wishes and prayers for Lily’s recovery; we can’t do it with out you!